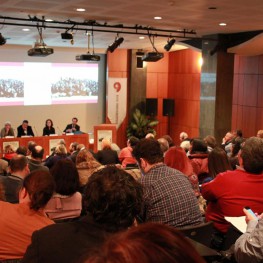 The Foundation of Lausanne Treaty Emigrants and Koç University Migration Research Center worked in collaboration with the Center for Asia Minor Studies and Research Center for Minority Groups to host the international symposium, “Turkish-Greek Compulsory Population Exchange in its 90th Year: New Findings, New Approaches”. The conference was held on November 16th-17th, 2013 – marking the 90th anniversary of the Population Exchange Protocol signed between the Turkish and Greek governments on January 30, 1923, which displaced approximately two million people from their homelands.

The symposium introduced some of the most recent scholarly works on population exchange and presented new findings and approaches from a variety of disciplines in order to promote discussion of the different dimensions of the issues we face today. The goal was to promote mutual understanding between the peoples of Turkey and Greece, while developing a culture of peace, consolidating multi-cultural perspectives, and protecting the common cultural heritage of the emigrants.

Participants’ articles will be published by Koç University Migration Research Center and the Foundation of Lausanne Treaty Emigrants. For detailed information on the conference and the participants you may visit the conference website.