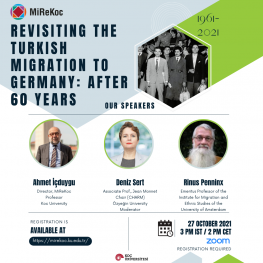 To assess and evaluate the 60th anniversary of the labor agreement signed between Germany and Turkey, Migration Research Center at Koc University organizes a special webinar titled “Revisiting the Turkish Migration to Germany: After 60 Years“. The panel will host Ahmet İçduygu and Rinus Penninx as speakers, moderated by Deniz Sert.

The webinar will take place on October 27th, 3pm (Ist)/2pm CET time via zoom. Registration is required for all participants.

Ahmet İçduygu is professor at Koc University, Istanbul Turkey, in the Department of International Relations and the Department of Sociology. He is also the Director of the Migration Research Center at Koç University (MiReKoc). He holds a PhD in Demography from the Australian National University. He is an elected member of the Science Academy in Turkey. In addition to his own individual research projects, Prof. İçduygu has conducted various research projects for the international organizations such as IOM, UNHCR, EU, OECD and ILO. His main research and teaching focus on migration studies, theories and practices of citizenship, international organizations, civil society, nationalism and ethnicity, and research methods.

Rinus Penninx is emeritus professor of Ethnic Studies of the University of Amsterdam. He has been involved in the field of migration and integration in several capacities. His report `Ethnic Minorities’ (1979) formed the starting point for integration policies in the Netherlands. He worked in Dutch Ministries on integration research and policy making (1978-1988). He founded the Institute for Migration and Ethnic Studies at the University of Amsterdam in 1993. From 1999 to 2009 he was co-chair of the International Metropolis project. He was coordinator of the IMISCOE Network of Excellence (2004-2009) and the IMISCOE Research Network (2009-2014).

Deniz Sert is an Associate Professor at the Department of International Relations, Ozyegin University, Istanbul. Before joining OzU, she was a Senior Research Associate at the Migration Research Center, Koç University, MiReKoc. An expert on migration issues in Turkey and globally, she has taught and researched at several institutions domestically and abroad. She received her BA in International Relations from Koç University, an MSc in European Union Policy Making from the London School of Economics, and an MPhil in Political Science from the City University of New York. She got her PhD in Comparative Politics from the City University of New York. She has published extensively on international migration within Turkey and its regions in journals such as International Migration, Journal of Refugee Studies, New Perspectives on Turkey, Ethnopolitics; and contributed in many edited volumes on related subjects. Dr. Sert has extensive project experience where she acted as a researcher at TRANSNET (FP7) and EUMAGINATION (FP7), and as a national coordinator at IMAGINATION (Urban Europe) projects. She is holding a Jean Monnet Chair on Migration and Mobility, CHARM (2019-2022). She is also an editor at the IOM’s renowned SSCI journal of International Migration.