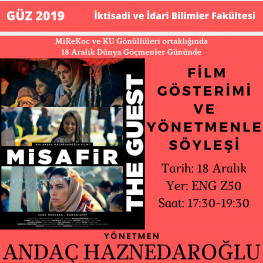 As MiReKoc and KU Gönüllüleri, we will have a movie-screen “The Guest Aleppo to Istanbul” (2017) on December 18,International Migrants Day, and then TALK with the movie’s director and writer Andaç Haznedaroğlu.

SUMMARY: The film follows the stories of Lena and Meryem, as they escape from the ongoing war in Syria. Lena is a ten-year-old girl who has lost her family in the war. As a result, she is forced to flee her home country and together with her younger sister and her neighbour Meryem seeks refuge in Turkey. Lena wishes for nothing more than the chance to return home, whilst Meryem aspires to reach Europe and start a new life. Upon their arrival in Istanbul and throughout their journey both are constantly tested as they are forsaken by the only people that can help them. But their efforts are not all in vain, as their odyssey ends with both protagonists learning about what it means to love and to take care of one another. With this film, Turkish director Andaç Haznedaroğlu wants to make it clear that anyone might have to undergo such a “journey”, emphasising the question “What would you do if war broke out in your country overnight?” Seeing the obstacles that Meryem and Lena have to overcome and their transformation into the heroines of their own story paves the way for the viewers to better understand not only the feelings, but also the challenges that Syrian refugees must face on a daily basis.

Directed by Andaç Haznedaroğlu, who lived with the immigrants in the border camps for three years, the film depicts the way Lena tried to migrate to Europe in the wake of the war in Syria. The cast includes not only professional actors and actresses such as Saba Mubarek, Rawan Skef, Şebnem Dönmez, Yeşim Ceren Bozoğlu, and Rıza Akın, but also hundreds of Syrian immigrants. The lead actress of the film, shot in one year following three years of preparations, is eight-year-old Rawan Skef. Rawan was selected from among thousands of children in immigrant camps, and she currently lives in an immigrant camp in Greece.